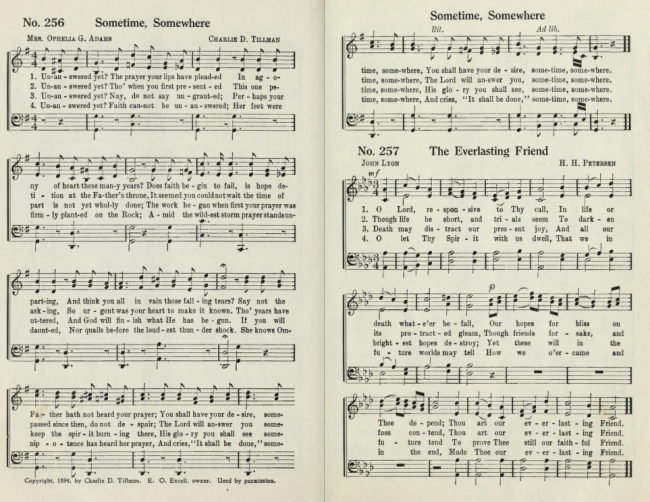 This hymn will be familiar to Danish, French, Japanese, Portuguese, and Spanish-speaking saints. In English it has gone by a few names including “Unanswered Yet?,” “The Prayer,” and “Sometime, Somewhere.” The lyrics are very lovely, although not exactly typical of those in our current (1985) hymnbook. Here is an English version from Deseret Sunday School Songs (1909):

You’ll note that this version is not written in four-part harmony. This setting and the four-part version that eventually made it into the foreign language hymnbooks leave a lot of be desired, in my opinion. The chromatic portion in the last line of the first page (see above) is an odd choice given the lyrics. Here is a recording of the current Spanish version:

LDS composer Rob Gardner has married the lyrics to a new setting that has echos of the original melody. It is set as a song with orchestral accompaniment (and is quite lovely, if I may say). It better reflects the feeling of the lyrics (again, all in my opinion).

What are your thoughts on the lyrics and the hymn tune? Do you think this hymn should be included in the upcoming hymnbook? Perhaps you are the one to write a new four-part setting. We’d love to hear your comments.

This site uses Akismet to reduce spam. Learn how your comment data is processed.