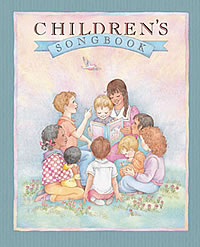 Are you interested in writing a children’s song for the Church’s recently announced new songbook for children? In this interview the prolific LDS children’s song writer Vanja Watkins said that a dissertation written by one of her former professors helped her immensely with her song writing process. Criteria for Selection of Children’s Songs in the Church of Jesus Christ of Latter-day Saints by Lue S. Groesbeck was written in 1966 but is still applicable today.

The following are 19 criteria that a panel of Church leaders, Church musicians, and non-LDS musicians felt were important to consider when writing children’s songs. These were later used to select music for Church publications:

These criteria contain a lot of musical jargon. We would love to explain any of them in more depth if you would like more clarification. Please comment below or send us a message through or contact page. We look forward to hearing from you!

(This post is an excerpt from a this choral music review.)

The presence of accidentals does not make a passage is chromatic. Chromatic passages occur specifically when you change the accidental of the same pitch. So for instance, in the key of C:

It should also go without saying that chromaticism is also not necessarily harder, stranger, or wrong. It’s simply a different relationship between pitches than a diatonic one.

Scholar David Huron explains that part writing (also called “voice leading”) “has been variously defined, but one simple definition is that it is the art of combining concurrent musical lines or melodies.” He continues, “The practice became codified into a set of recommendations (do’s and don’ts)” around the 1500s. These recommendations have evolved over the years along with changes in style, taste, and insight.

Fully trained musicians recognize that mastering part writing requires more than simple adherence to these rules. As a simplification of musical practice, the rules cannot cover every scenario. In certain situations, the rules may contradict each other. At other times, the goal underlying a particular rule may not align with the composer’s musical goal. Thus, though students of part writing begin by learning some basic rules, they best master the art is by studying masterworks.

Without “dumping the whole load of hay,” as Elder Maxwell once put it, here are two brief examples to consider:

Most amateur musicians recognize Bach as one of these master composers, but a composer they may not know is Palestrina. Palestrina’s “Sicut Cervus” is breathtaking not only for the beauty of its sound but for the grace of its voice leading. Each of its five parts are graceful to sing and seem to fit effortlessly with the other voices:

Good part-writing is not only the provenance of master composers. Professional choral composers also distinguish themselves by their voice leading. Part of the reason Eric Whitacre is famous for his cluster sound is not only because it’s breathtaking but also because he wrote the parts in such a way that this effect is as easy as possible to achieve:

Closer to home, listen to Ronald Staheli’s version of “I Know That My Redeemer Lives.” (You can find the music on holysheetmusic.com.) It is another excellent example of professional-level voice leading, but in a familiar, LDS context:

Learning to identify good part writing can especially be a challenge for amateur musicians who lack the time and resources to devote to its study. That’s part of the reason I’m writing these posts—to help you discern quality craft beyond mere surface beauty and, in turn, to help you see how an understanding of craft enables you to see beauty and feel the Spirit in ways that require sensitivity to these details.